Transition Character Areas are areas within the Conservation District that lie outside the Historic District and serve as buffers from the impacts of development in newer areas of the community.

The purpose of the Transition Area Standards handbook is to establish design standards for review of development applications for properties within the Transition Character Areas. These standards will include building scale, height, materials, and general site design.

Over 2010 to 2011, Town of Breckenridge Planning Staff presented detailed individual reviews of the “Handbook of Design Standards for the Transition Character Areas of the Conservation District” to the Planning Commission. Staff also held an open house in August of 2011. After community and Town Council input, the standards were formally adopted on March 27, 2012.

Within these standards, the adopted map shows the limits of the South End Residential Transition Area abutting Historic Character areas beyond the Summit School District properties. The School’s property is outlined in red in the map below and is currently outside the Conservation District. 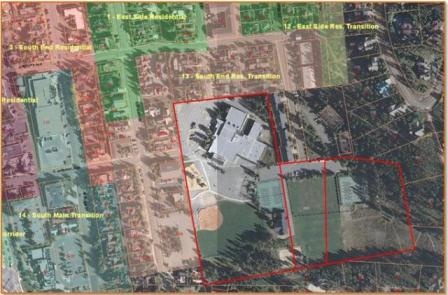 The main goals of the Transition Areas are to “buffer the edges of the Historic District” and “establish and enhance a sense of neighborhood identity”. Staff believes that, if the school were to sell their property, the current suggested intensity of use and development guidelines may have negative impacts to the neighboring Conservation District.

The property lies in Land Use District (LUD) 26. This is the same LUD that includes portions of Sunbeam Estates, Hermit Placer Grove condominiums, and the Falcon Condominiums. This LUD suggests any residential use at 4 units per acre (UPA), encourages greater setbacks than suggested by the Code, and discourages building height in excess of 3-stories (38-feet tall measured to the mean of the roof).

There are no platted lots on the west-most Summit School District property. Hence a variety of scenarios are possible. However, if this property were to be included into the South End Residential Transition Area, the more restrictive provisions of the Code would be applied.

Staff is currently reviewing this issue with the Planning Commission with a series of worksessions.

For additional information, please contact the Planning Department at 970-453-3160 or websitecommdev@townofbreckenridge.com.

Free viewers are required for some of the attached documents.
They can be downloaded by clicking on the icons below.