The state's moose population has grown tremendously in the last 30 years. Prior to 1980 there were only occasional sightings of moose that wandered into Colorado from Wyoming and Utah. Beginning in 1978 the Colorado Parks and Wildlife began efforts to introduce moose into Colorado. The program has been a success as the moose population is now approaching 2,000. The growth is partly because the moose has no natural predators in Colorado such as grizzly bears and wolves.

The increase in moose population results in an increase in human encounters with moose. Moose do not fear humans as much as most other big game species. Moose tolerate a nearby human longer and at closer distances. They are curious and will often approach humans or houses. For these reasons, it is extremely important to understand moose behavior when living in or visiting the areas they inhabit.

Signs of aggression include the hair standing up on their neck, licking their snouts, cocking their head, rolling their eyes and ears back.

STAYING SAFE
NEVER approach moose too closely. Watch and photograph from safe distances using telephoto lenses, binoculars and spotting scopes. Remain at least 50 feet away.
NEVER get between a cow and a calf.
NEVER throw anything including snowballs at a moose.
ALWAYS keep dogs under control or leave them at home (A dog may chase after a moose and suddenly find the moose chasing it. Naturally, the dog runs back to its owner bringing the moose along with it).
AVOID moose that are in a fenced area or between houses; they may feel cornered.
If the moose knows you're there, talk to it softly and move away slowly.
Don't be aggressive - you want to convince the moose that you aren't a threat.

If a moose charges:
Try to get behind a tree or something solid. You can run around the tree better than it can. 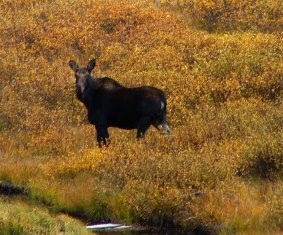 Unlike with bears, it's usually a good idea to run from a moose because they won't chase you very far.
Raise your hands over your head and spread out your fingers. Hold your arms still, don't wave them. Sometimes the moose will think that you are another animal bigger than he is.
If it knocks you down, a moose may continue running or start stomping and kicking with all four feet. Curl up in a ball, protect your head with your hands, and hold still. Don't move or try to get up until the moose moves a safe distance away or it may renew its attack.
View Full Site